Our building flooded (and here's what I learned) 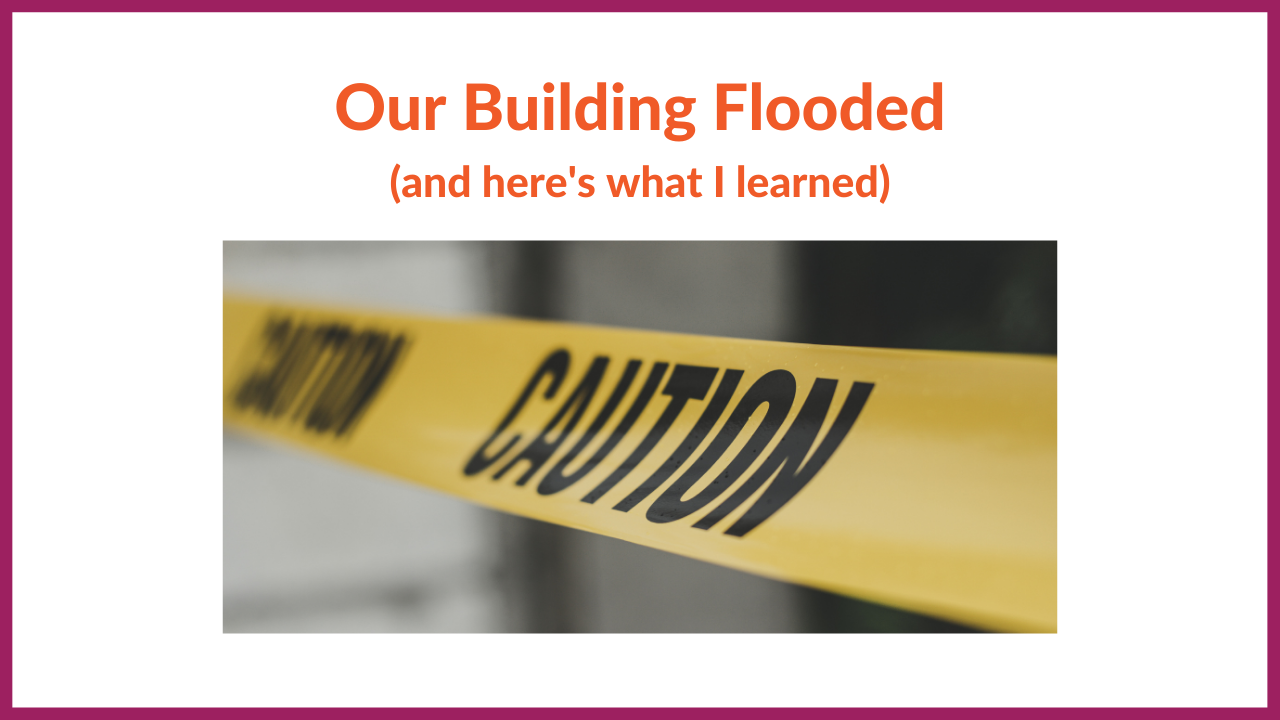 Lest you’re under the impression that my life is constant angel song and Leave It to Beaver moments, let me tell you a story.

Last week, Paul, Oakley and I were eating breakfast (Zoe was already at early morning choir practice) when all of a sudden, the fire alarm started blaring. You know, the piercing shriek that takes up residence in the very center of your brain? That’s the one.

Having been through countless fire drills at school, Oakley started gathering things that were important to him (including his bread tag collection) and urged us to leave the building immediately. Since we have many easy exits, though, Paul and I took our time. We told him it was probably nothing. Eventually Paul and Oakley went outside to see what was happening when the fire trucks actually showed up in multiples.

A little while later, they returned (finding me with noise cancelling headphones on to protect the very centre of my brain) and said that a pipe had burst (since it went from about -40Celsius to +7Celsius overnight) a few doors down. Apparently the neighbours 2 doors down already had about 3 inches of water in their place - and they had just moved in two days prior!

The hallways started to get quite busy with firefighters and then the neighbours right next door started getting lots of water in their place too. For some reason, I still had it in my mind that nothing major was happening.

Shortly after that, water started coming into our place too, seeping insidiously through the closet walls in significant quantities. One of the firefighters told us to get all our towels to soak up the water, so that’s what we did. Fortunately, we have very absorbent towels, so the water didn’t get too far. We quickly emptied out the front closet and the storage closet, moving all our shoes and other paraphernalia to our bedroom.

For the next 30ish minutes, we put towels on the floor, let them soak up the water and then wrung them out in the shower. I was impressed that I even had the presence of mind to call Oakley’s school to tell them that he might be late. Fortunately, the people who knew what to do had already turned off the water, so it didn’t get past our closets.

The water gradually eased up, Paul and Oakley left for school, and I got to run my call that I thought I was going to have to cancel. (The inbox clearing call. I cleared out over 1400 emails!)

Later in the day, there was a knock on the door and some construction-y type men came to look around. I thought that would be it since everything seemed all cleared up. I was mistaken. Both our neighbors had over 6 inches of water in their places, and when I went out later in the day, I saw all sorts of drywall had been torn out.

We later learned that our neighbours had so much water in one of their closets that it had completely collapsed!

By the end of the day, all our baseboards in the front entrance and closets had been removed and giant loud drying contraptions had been installed in our space, as well as in the main hallway and there they stayed for the rest of the week, blowing hot air intensely and persistently. 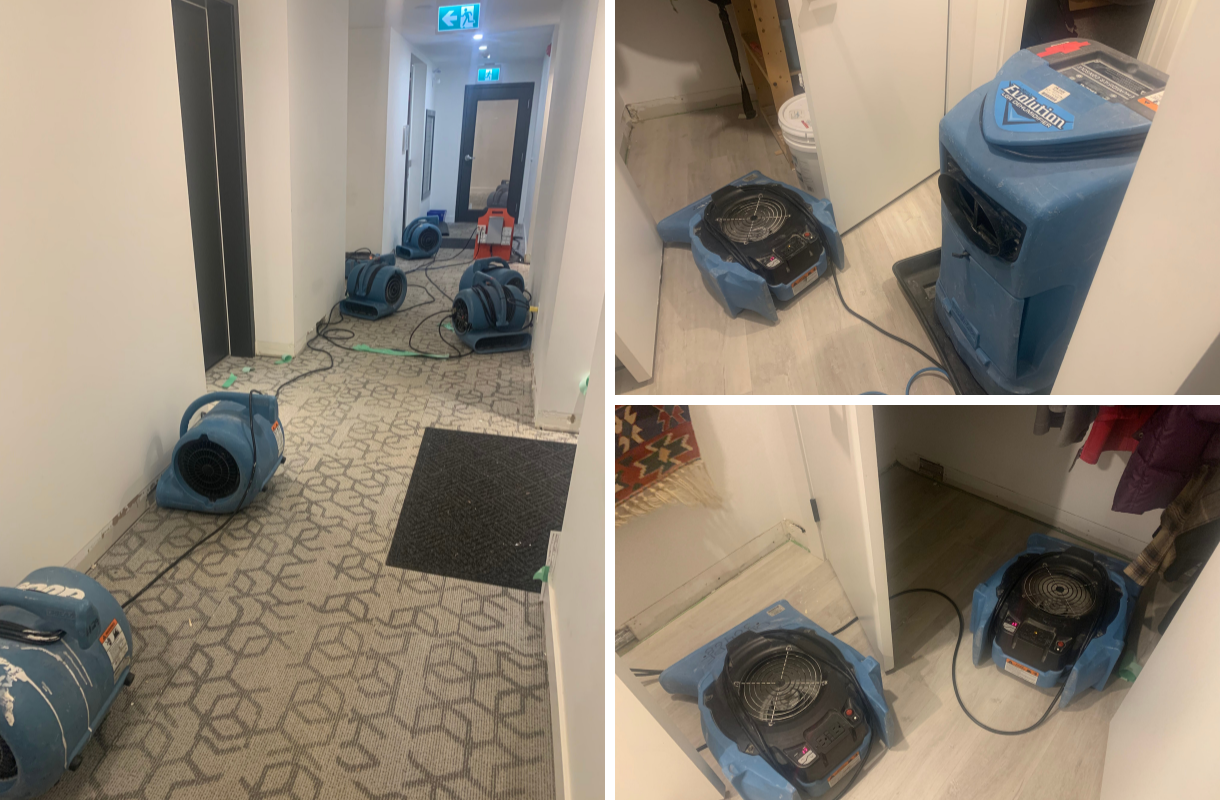 It was quite an adventure. Here’s what I learned through some contemplative reflection.

1- To me, it seemed like a metaphor for how riding the wave of grace works. We were just minding our business and then all of a sudden, chaos erupted. Fortunately, help was available. There were people trained specifically to deal with this kind of situation. I hadn’t known about them up until then, but there they were, taking care of business and all I had to do was wring out some towels.

I also didn’t know that there were giant fan-type machines to dry out buildings, but there they were, blowing and drying. Someone at some point had designed and created the very thing to solve a problem we didn’t know we were going to have. The more I thought about it, the more in awe I was.

What a magnificent system the Universe has in place. All I had to do was stay calm and let things flow (literally!). Plus, because we rent our current place, none of this assistance and repair cost us a penny! What abundance.

2- Another thing I received from the flood was an indication that I’ve really shifted from someone who would have gone all worst-case-scenario, to just taking it one step at a time: There’s a fire alarm… what action needs to be taken? Get the computer and the G-drive, everything else can be replaced. There’s water seeping into our place… get some towels. The neighbours’ places are flooding… keep wringing out the towels. There’s a lot of moisture in the building… someone will take care of that with giant turbo fans.

There was no panic, no worry, no fight or flight response. I just got present, followed instructions and it was almost a non-issue. That NEVER would have happened before I started doing the work of Courageous Self-Care. I would have contributed to the problem rather than be part of the solution and it would have been a Crisis with a capital C.

3- There was a great opportunity and invitation to go with the flow (fully owning that pun again) in the aftermath and to cultivate trust. I love a clean and orderly space as much as the next Home Edit fan.

The fans were really loud and we had to negotiate our way through them for several days. We didn’t know when they would be taken out, and I wasn’t bothered by that in the least, even at night. What a change from a former version of me who would have been bothered to no end about the invasion of our space and all the other aspects of the inconvenience.

Now the fans are gone (yay!) but we’re not quite back to normal yet. Because of the flood, there are boots on the floor upstairs, our bedroom is full of storage closet stuff, and we don’t know when the helpful construction-y people are coming back but I trust that it will happen in perfect timing with no effort (or interference) on my part.

4- Events like this flood happen so that we can take a look at ourselves and see how we’re showing up. Have we shifted? Do we continue to let the same things bother us? They can be great checkpoints to assess our behaviours and mindset.

5- I feel super lucky and I also believe that I create my own luck. Whatever you believe becomes your reality, so I choose to believe that luck is always on my side. Many years ago, I learned to stop saying “That’s just my luck” when something undesirable happened. Instead, I replaced it with “I am so lucky!” Based on this flood experience, I think that shift is working out pretty well, don’t you?

I feel so proud of myself that the flood was pretty much a non-issue for me. I also feel immensely grateful for our good fortune in having very little damage. Two doors down, all the floors have been torn out, along with much drywall. I can’t say I would be writing a similar email if we would have had 6 inches of water as well, but I did get an opportunity to check in with my attachment to my belongings, and apart from our G-drive with photos and videos of our kids and some of our older photo albums, it feels like there’s a deep acceptance that almost everything is replaceable and even if it’s not, that’s okay too.

Courageous Self-Care takes consistent effort and daily practice and it’s events like this flood that show me that it’s totally worth it. What would have previously been a wild and mountainous roller coaster was just a little bump in the road thanks to the perspective I’ve cultivated by continuously choosing to honour my emotions, work with my mindset and embody the incredibly powerful energy that I am.

And please note, that’s not just me. You’re an incredibly powerful being of energy as well. You are a magnificent creator and the more you breathe intentionally, move your body with consciousness and master your mindset, the better your life will be too. If you need help with that, I’m happy to show you how :)

With an inundation of love and cataclysmic courage,

*Grateful for Creators of Turbo Fans

*Happy that it’s warmer, even if it makes pipes burst

PS - If your inbox is still out of control, there’s still time to tame the beast. Join us for the Inbox Clearing and Unsubscribing Extravaganza this weekend if your inbox needs some undivided attention and you need some motivation. There’s even a 50/50 draw for added mystery and delight . Click here for all the details and dates. 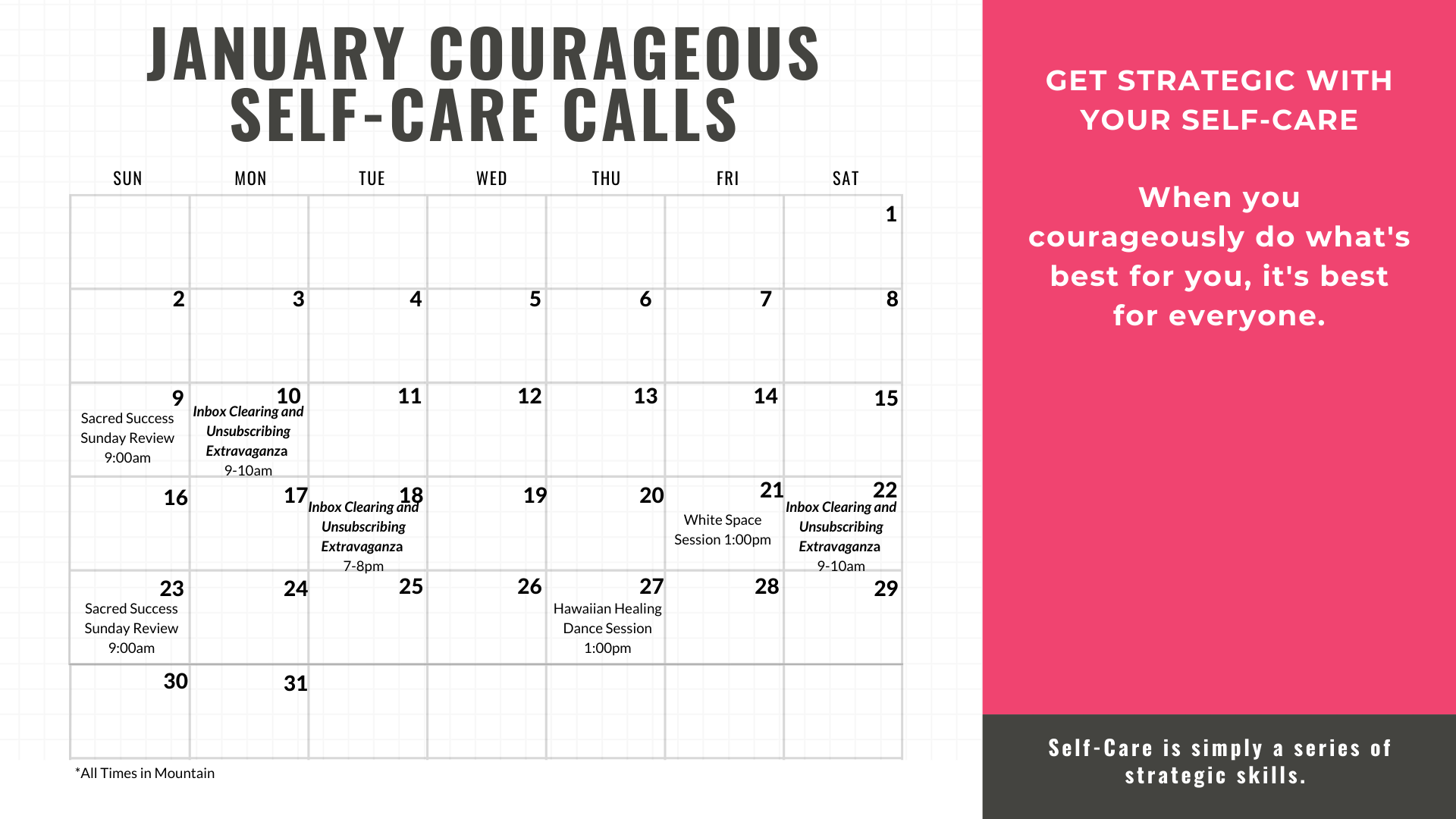