The Bug Series Part 2: The Bee and the Broken Window 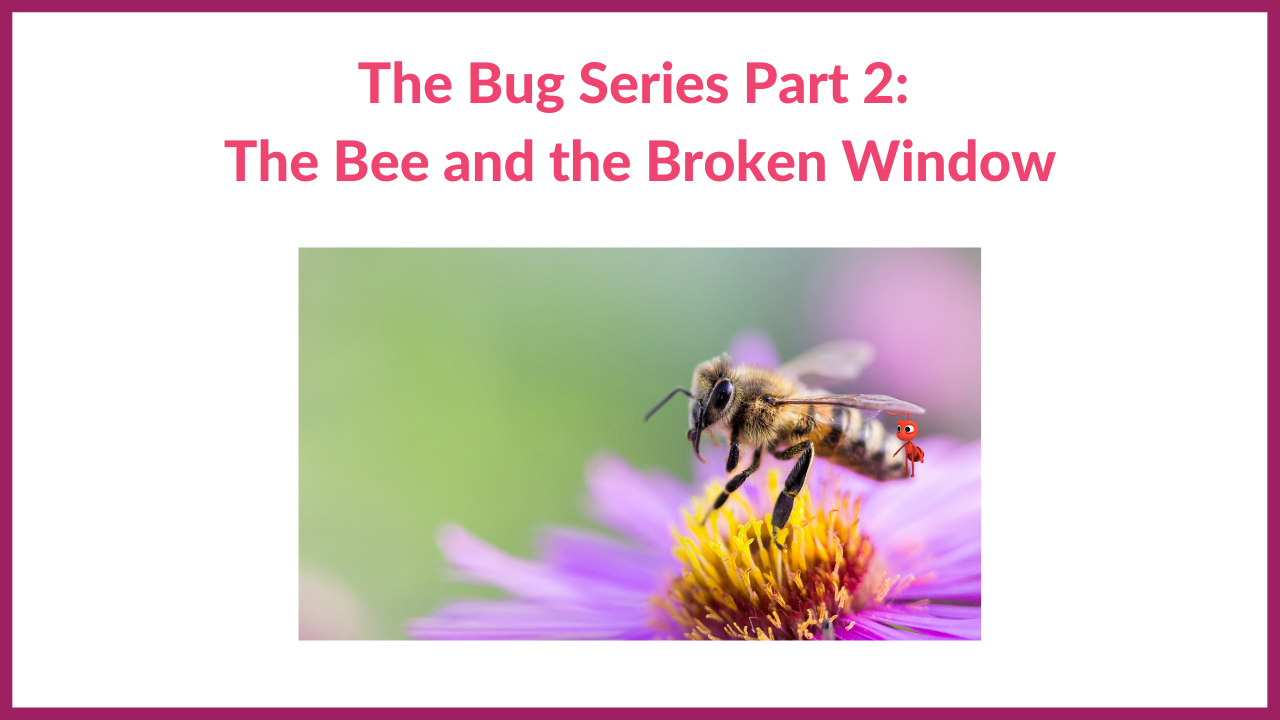 You may not think that bugs and self-care really go together (and I kind of wish they didn’t) but I’ve had some profound lessons from those little guys and so here’s part 2 in the series. (If you missed The Ant and the Shower and your curiosity is piqued, you can find that here.)

Today we’re moving on from ants to bees. Specifically one bee that had a big impact on me.

A couple of homes ago (I love to move), we had a kitchen with a big old window in it. I hadn’t paid it much attention until the day I heard a low and loud drone in the house. A thumb bee had found its way in (I don’t know the real name for that kind of bee, but we call them thumb bees because they’re as big as your thumb… almost.) 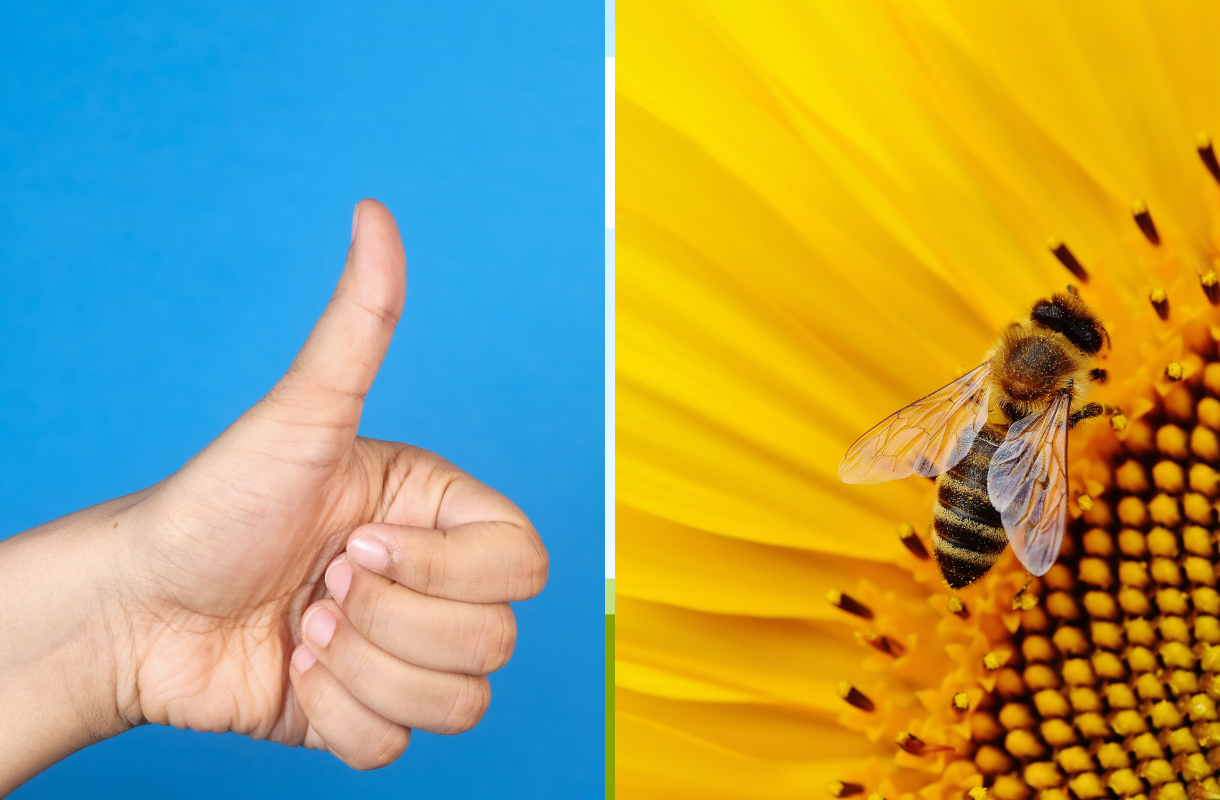 Dismayed to be home alone with a bee in the house, I realized that I wouldn’t be able to call on my kids or husband to remove said bee. My daughter, Zoe, actually likes bees; she even pets them and they seem to like it. My son, Oakley, has done a lot of bug removal for me, as has my husband, Paul. I prefer to keep a 6 foot radius from all bugs. As far as bees go, I like honey and feel very grateful for bees, and also, stay out of my house!

This bee didn’t follow my wishes, and so there we were. A big bee flying around the kitchen and me contemplating what to do. I opened the door to the backyard nice and wide, but the bee didn’t seem interested in easy freedom. It ignored my air traffic directing signals and went instead towards the kitchen window, which was not open at all.

Carefully, I made my way over and started opening the window so that it could fly out, but apparently the window was actually broken so all that happened was that the bee flew into a crevice inside the window where I could no longer see it. I didn’t want to crush the bee, because I value life, even if it’s in the form of a bug, so I couldn’t close the window either.

Looking around for inspiration, I saw a bunch of flowers in a vase. I grabbed a bright pink Gerber daisy and took it over to where the bee was stuck, hoping to entice it out of the tiny space and onto the flower. I hoped that it would hop on and I could then take it outside. Instead, I just ended up wedging the bee even deeper into the crack with the pretty flower. Oh dear. I really didn’t want to be a bee killer.

The next obvious solution seemed to be to crank open the window to make the bee prison/crack bigger. The window was behind the sink, so I leaned over and started winding the handle to open it. Instead of the one side of the window opening smoothly and easily, the whole window kind of fell out of its enclosure. We’re talking probably a three foot by two foot window now tipping out of the frame where it was supposed to be attached and me holding on desperately to the crank so it didn’t crash down onto the slab of pavement a story below.

At this point, the bee regained its freedom so yay! Mission accomplished.

The new mission became: figure out how to not break the entire window so our brand new landlord would still like us.

On that particular day, I had chosen a short tight skirt, probably just to make things fun. As I held the window crank, I tried to crawl up onto the counter/sink, which was seriously impeded by the shortness and tightness of my skirt and the fact that I only had one hand available.

I remember sort of shimmying up onto the counter in the most awkward position possible and being drenched in sweat, both from the effort of restricted movement climbing and from the fear of the window potentially plummeting to the ground. At that point, all I could do was laugh. If only I had a video camera…

The window kind of got wedged at a 45 degree angle and stuck there (creating a nice wide welcome for way more than one bee; fortunately none took the invitation). It was stuck enough that I could let go (and pray that it stayed stuck), climb down off the sink and go investigate the situation from a new perspective.

Outside in the backyard, I found a ladder conveniently placed under the window and I was able to climb that (still awkwardly in my short tight skirt) and jam the window back into place in its frame. Phew!

The adventure has stuck with me and I’ve reflected on it many times. Here are some things I learned:

1-It really reinforced for me how much I value life. Even though I don’t love bugs, I was willing to do whatever it took to save a life. Killing the bee wasn’t an option and that gave me an opportunity to celebrate my values. Self-care means being clear on your values and celebrating being aligned with them.

2-The bee and the window got saved because of resourcefulness and creativity. Self-care means being creative and looking at things from new perspectives. It also means using what you have on hand to solve any issues that present themselves.

Self-care also requires persistence. Sometimes I’ve worked with clients who have used challenges as “signs” that they should quit. For example, a woman who knew she needed to move her body more went to the gym and couldn’t find a parking spot. She told me it was a sign to go home. I had to disagree. I think that often these ‘signs’ are just opportunities to be more persistent.

4-Getting the bee out on my own verged on the catastrophic. Nothing like that has ever happened when I’ve asked for help with bug removal. The same can be said for self-care.

Although the word ‘self’ in self-care implies that it’s something you do on your own, it can be much easier, simpler and more effective when you have help. Humans let themselves down all the time.

If you can find ways to be accountable in your self-care practices, you’ll be more likely to benefit from them. From what I’ve seen, the best self-care actually happens in community. If you could use some self-care support, check out the upcoming events on the calendar below.

5-No more short tight skirts. It’s just not worth it.

Thank you thumb bee for all your lessons.

May you (as in you, not the thumb bee) have a week filled with persistence, resourcefulness and growth. Although I’m eager for spring, I appreciate the current bug-free season too.

With inventive love and ingenious courage,

>Masterful at finding the silver lining in any situation

>Purchaser of homes with newer windows from now on

PS - Our next Body Awake Yoga Community Class is happening this Friday, March 4 and it’s my gift to you. Join us live or access the recordings as many times as you like. Click the image below to join the community if you haven’t already. If you have, you’ll get an email with the link prior to the class. 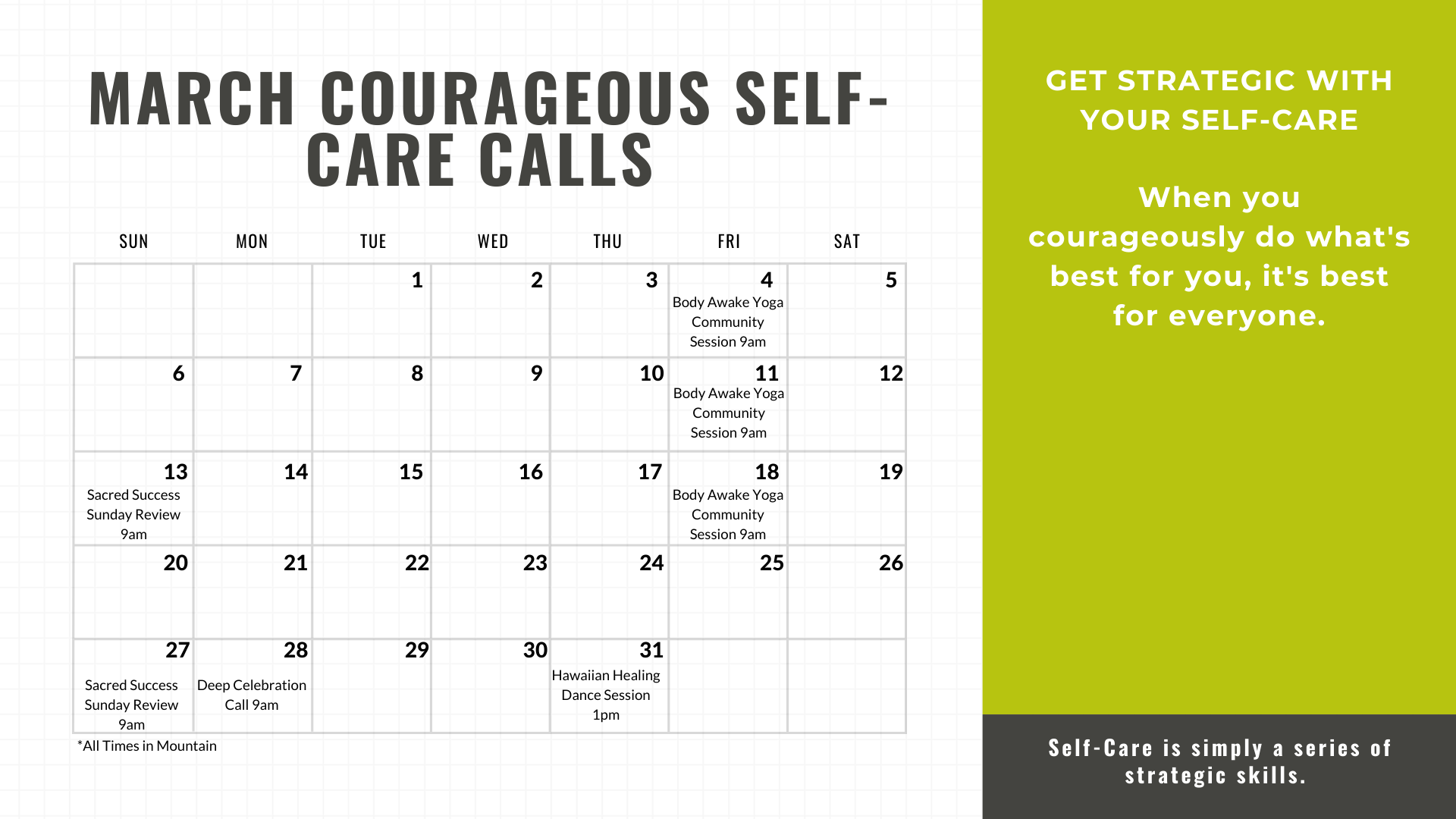 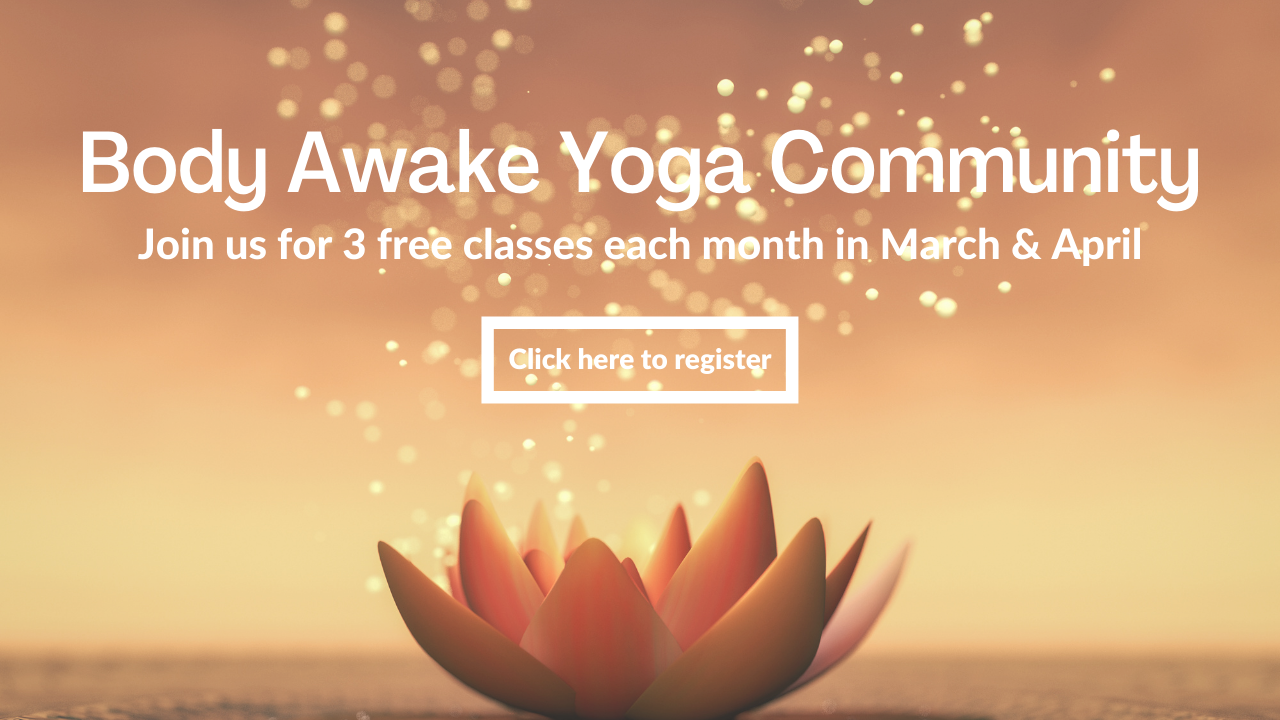