Oh how the Universe laughed at (with) me this week 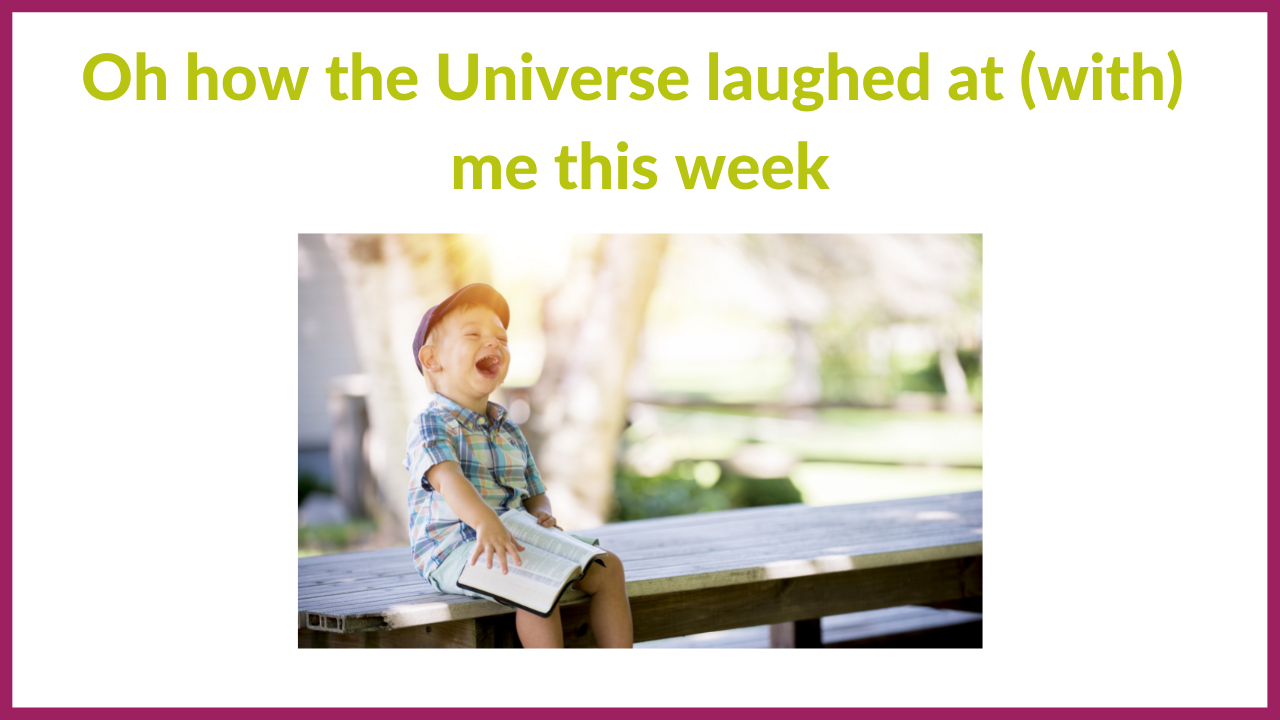 Last week, I excitedly told you about how Oakley (my son) got a role in an Olympic commercial. Little did I know a big lesson was a’comin for me and, boy, was it funny.

On Monday, Paul (my husband) took Oakley to get the Covid test necessary to be on set. An information email said that both Paul and Oakley were to be tested. When Paul got there, they said only Oakley was being tested and that Paul would get his test on set on the day of. Feeling that wasn’t right, Paul asked several times, but was told the same thing each time. He would get tested on set on Wednesday.

For much of the day on Monday and Tuesday, Paul and I took Oakley around the city to get the various things he would need. We discovered on Sunday that he had outgrown all his ski gear, so we went hunting for replacements. Then Paul prepped the both of them on Tuesday evening for an early rise on Wednesday.

Paul had never gotten to go on set before, so he said he would take a personal day from teaching to take Oakley to the shoot. He made his sub plans and was very much looking forward to the big day.

THEN. Tuesday evening, 9:30pm. Oakley was already in bed due to the 4am planned wakeup time. Paul got a text asking him for a copy of his PCR test. My heart dropped. Paul texted back that he was told he would be getting the test on set on Wednesday morning. The answer was that that was impossible as they weren’t testing anyone on set. I told him to call to sort it out.

Basically, he was told that someone messed up and now there was no way Oakley could go on set without a chaperone. I said that there must be a solution: a rapid antigen test perhaps? The answer was that it would be impossible. Their offer was a cancellation fee for Oakley of a few hundred dollars and they would try to find a snowboard or a pair of skis that they could give to him once the shoot was done.

I hired a heavenly helper to help resolve the issue and prayed with all my heart that there would be a solution, but by the time Paul hung up, he said that he would have to wake Oakley up and tell him that they wouldn’t be able to go. 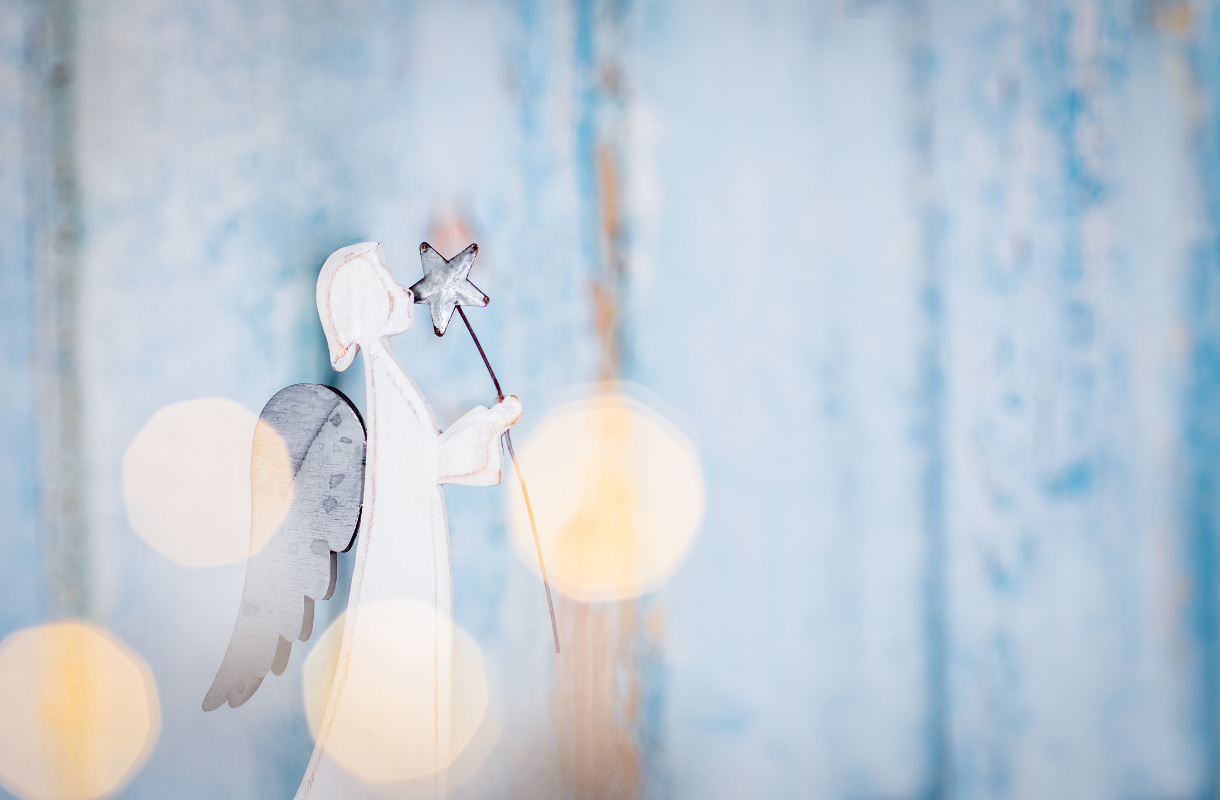 I was devastated. As I mentioned last week, it’s been years since Oakley has had a role and I felt there was a lot riding on this experience. I cried and cried. Then I breathed and breathed.

Paul said, “Okay. Here’s an opportunity to practice what we believe in. Everything happens for our highest good, so there must be something that’s good about this. What’s good?” (I know, he’s amazing.)

Although these were good reasons to let it go, I said to Paul, “I just feel like he’s going to be devastated. His self esteem is so important to me and I just feel so sad about it.”

Paul agreed, but since there was nothing left to be done but to let it go, that’s what I did. Paul was about to go wake Oakley up when he got another text. It said: UPDATE!!! You can get tested at the hill. See you both tomorrow!

My heavenly helper pulled through! It was a total miracle. I felt soooooo relieved, happy and grateful.

The next day, the boys were up and off early as planned. There was no cell reception on the mountain, so I didn’t hear anything until they were on their way home and back in range.

When they called, I was excited to hear about their adventures. Oakley said, “Well, it was interesting. I didn’t get to ski and all I did was build a snowman.” The connection was a little glitchy, so when they got home, I heard the whole story.

Apparently, it was a gong show. It was super disorganized, no one seemed to know anything and Paul and Oakley pretty much spent the entire day waiting in different locations. To pass the time, Oakley built a snowman. Later, it started raining, making the conditions unskiable. Plus, they ran out of food for both breakfast and lunch. At one point, they got offered a bag of meat, which can only be classified under ‘Super Weird’. Paul said, “The day was not magical.”

What a bummer. And what a lesson for me. I learned a good deal about trusting the Universe.

The Universe offered up a much better solution (the cancellation fee and free gear) but I was so attached to Oakley’s self esteem and things happening in the way I thought would be best that I muscled my way through it.

It was like my heavenly helper was sitting there saying, “I hear what you’re asking for, but are you sure you want that, because we’re offering something way better.” In my fervent prayer, I was able to manifest what I wanted, but I learned that I certainly don’t know best. My little brain is no match for Infinite Intelligence.

Of course it happened in the absolute perfect way, because I got the lesson I needed. And, had Oakley missed out on going to the hill, we never would have known how un-amazing the commercial shoot would have been. I, for one, would have felt regretful, but in this case, it just showed up so beautifully as a teachable lesson. The next time things don’t go as planned, I’ll know that when a new opportunity is offered and it’s different from what I thought was best, it’s a gift to strengthen my ability to trust in the Universe.

I may be really good at getting what I want, but I’d rather be good at trusting and going with the flow. What a hilarious way for the Universe to deliver this profound and important lesson.

As with many great lessons, you don’t necessarily get what you want, but you do get what you need. Good one Universe! I’ve laughed over and over about how divinely orchestrated this lesson was. How could it get any better than this?

So, last week I promised to share the commercial once it came out. I won’t be doing that. Instead I’ve shared this lesson that I hope was helpful for you, or at the very least, entertaining. I mean, c’mon… a bag of miscellaneous meat? (Being plant-based, Paul and Oakley politely declined the curious melange of bologna, hot dog, beef jerky, kolbassa, etc. However, we’ve laughed so many times about the bag of meat -b.o.m.- that it was almost worth it just for that.)

May you have a week filled with ever-expanding trust.

Decliner of bags of meat

Much more humble than last week :)

PS - Next week I’ll be inviting you to some special events later in the month; a Year End Retrospective and a Conscious New Years Eve Celebration. They were two of my favourite sessions I led all year last year and they were a hit, so by request, I’m doing them again. If you want a sneak peak, click on their respective links.